LIFE LESSONS WITH A PRAIRIE BOY 1 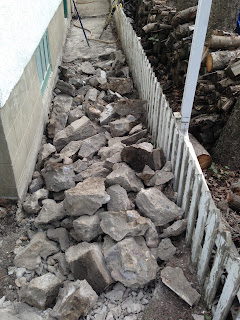 For many, many years the sidewalk on the south side of my father's house in Canada has been slowly sinking, tipping towards the house to the tune of about 5 inches. The result, of course, is that when it rains that entire side of the house becomes a trough and in a heavy rain it becomes a river. Over the years there have been problems with water working its way into the basement.

I solicited a couple of quotes from two local concrete companies and both came in at similar prices. About 12 thousand dollars to jack hammer and remove the old sidewalk, prep the soil, form and pour a new sidewalk as well as a swale drain running the entire length of the property.

One serious factor is that the distance between my Dad's house and the neighbor's fence and trees is too narrow to allow any equipment, such as a small bobcat, to be brought in to assist with the work, so all of the work needs to be done by hand.

My Scottish blood was taken aback at the quotes and I said to myself, "How hard can it possibly be? I'll get my brother, set aside a couple of days, rent the necessary tools, remove the old sidewalk, build and pour the new one and, as my friend Kevin would say, "Bob's your Uncle!" Turns out I may have been just a tad optimistic and like so many things in life, everything is not always as it appears.

My brother and I rose bright and early as to be able to get a good start on the day. 9 a.m. is bright and early for someone who has been in the music business their whole life. We got ourselves down to the local rental shop, explained what we were doing and left with an electric jackhammer, several large bits and an assurance that it would probably do the job just fine. The gentleman did mention that if it wasn't adequate, we could return it and procure a much larger and more powerful one.

Returning to the house we were eager to get right to work. With plenty of water and cokes on hand for energy and hydration we donned our hearing protection. The crew consisted of my brother Dave on jack hammer and yours truly as grunt labor and supervisor. With a roar the machine came to life and Dave began to direct it towards one end of the sidewalk. Ratty tat tat went the machine and the sidewalk began to shake and slowly break up in large chunks and I said to myself, "See, I knew it, this is a piece of cake. We'll be finished this by noon, just in time for lunch and a good afternoon nap." I began to fill the wheelbarrow with the chunks and take them out to the road and load them into the waiting truck.

No sooner had I left with my first load than Dave called me over to show me something. There appeared to be a second sidewalk under the first. Not only that but it  was a solid 8 inches thick! Now we had problems! The machine we had rented hardly put a dent in the second sidewalk although it seemed to be doing an adequate job on the first one. After a quick committee meeting we decided to remove the first sidewalk that day, rent the bigger machine the next and tackle the second sidewalk.

Morning work started early again at 9 the next day. We went back to the rental store and returned with a heavy, pull behind diesel compressor and jack hammer complete with 100 feet of hose and bits. Firing that baby up, we had no sooner gotten started when Dave pointed out something to me.

There was a 3rd sidewalk!

Evidently at some point, after the first 8 inch sidewalk had sunk, someone had poured a 2 inch sidewalk on top of that to try and fix the problem. Then at some later time, a 4 inch sidewalk was poured on top of that. So all in all, we were dealing with 14 inches of concrete. A friend, who had removed a sidewalk some years earlier and had also found an additional sidewalk, estimated that there was a minimum of 9 tons of concrete in total that we were trying to break up and remove.

Of course in the bigger picture we were now dealing with having to bring in at least a foot of clay, packing and tamping that, then bringing in road crush rock to put on top of that. All this before we could start building the forms, place the rebar and tie the whole lot into the foundation of the house and finally pouring new concrete so that this would never happen again . . . at least in our lifetime.

This struck me a lot like life. So many times in relationships, business and matters as straightforward as maintaining our vehicles and homes, if we simply try and patch the problem without getting down to the root issue, often matters just get worse. The band aid solution only gives temporary relief. Efforts at half baked measures only go so far, making the many layers of the onion even harder to peel off.

Dad always told us, "If something is worth doing, it's worth doing right." Clearly this advice had not been heeded as none of the three sidewalks had ever been properly tied into the foundation with rebar. There was no adequate soil preparation and a long list of other items that should have been taken care of from the get go. These would have ensured that the job was really done right and would have not added much cost to the overall project.

Because as Dad always told us, "Don't start something unless you can finish it."

Oh yes, and now I understand why those quotes were so high . . . and they didn't even know about sidewalks 2 and 3!