NO SHOES, NO SHIRT, NO SERVICE! Bob Dawson was a character who should have been in the movies. A most friendly guy with elegant white hair, Bob lived across the street from us when our kids were very young. Bob was never short of a story and entertained us with tales of gold mining in the Yukon along with some of his other exploits. He owned a big 'ole Cadillac that he kept parked in the front yard while he drove his old brown pickup truck.

One beautiful summer evening he was walking around the neighborhood visiting with whoever was out and about. Wearing a golf shirt, dress shorts and white golf shoes, Bob had a real presence. As he moved around from house to house, yard to yard, chatting away, he had in his hand a cup of tea. The cup had the string of the tea bag hanging over the edge. I was watching him make the rounds of the neighborhood when I noticed the most hilarious sight. There hanging down from one of his legs was an extra pair of underwear. He had obviously forgotten to take the old pair out of his shorts when he pulled them off the night before. In the morning he had managed to get one leg through the proper hole. Wearing three pairs of shorts, he was as happy as a lark. Sipping his tea, he was completely oblivious to his wardrobe, although those that visited with him must have wondered what the latest fashion was that Bob was wearing that day. When it came time for Bob to move on, he approached us about renting his house. Dubbing it the "Dawson House", we were thrilled with the added space for our growing family.

One Sunday morning in June we were getting ready for church and I went out to start the car. That morning was particularly hot and I thought I would get the air conditioning going before we loaded the three kids into their car seats. As I approached the door, I looked down to see a body lying face down in the front seat. Dressed only in a pair of pants with no belt, the lifeless figure didn't budge as I opened the door. Suddenly I thought, "What if this person is dead?" I ran back inside to get Cathy and see what we should do. I thought maybe we should call the police. She came outside with me to look at the scene and determined that all this person needed was to wake up. Showing a great deal more bravery than myself she started shaking his shoulder and yelling, "Hey, wake up, wake up!". Eventually the body began to stir. Cathy asked, "What are you doing in our car?" Appearing to be in a great deal of confusion, the young guy slowly sat up. With a most bewildered look on his face, he told us that he thought he was at his friend's house. When he had tried to get into the house the previous night, the door was locked. You can imagine the look on Cathy's face when she realized that had our door not been locked, he might have been sleeping in one of our beds! Needing a place to sleep he had decided to lay down in our unlocked car.

He asked us where Alan McLeary lived. We told him we had never heard of the McLearys. He had no wallet or ID and seemed completely clueless as to where he was or how he got there. As he started to stand up you could see the impression of the car seat fabric over his body. It was obvious he hadn't moved in quite a few hours! "Where am I?", the stranger asked. I told him he was in Three Hills. That didn't seem to ring a bell with him. He asked a couple of other questions and we realized that this guy was not from our town and had not willingly come to visit. He started to walk down the street towards the highway. I offered to call someone for him, but he ignored me and kept on going, staggering down the street. It was evident that his "friends" had gotten him plastered and just dropped him off in a foreign town to fend for himself.

So if you see a guy walking around your town in a bit of a daze, with no shoes and no shirt, please give him some service . . . and keep your cars locked!

"DO YOU KNOW WHERE YOU LIVE?" 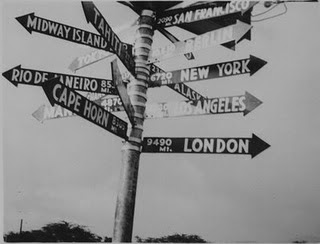 A short time after my Mom passed away in October of 1993, I was called on to assist my Dad in tidying up some of his business affairs.

I accompanied him to the bank, insurance and utility companies to get the details changed over to his name and file the death certificate with the appropriate parties. One of Mom's giftings was tracking the family finances. Because of this and the fact that Dad was very busy, Mom handled all these areas over the years and Dad was thrown into the deep end of the pool with her passing.

It was at one of these appointments that Dad was asked by the clerk what his physical address was. Silence followed the question. The clerk repeated the question perhaps thinking that Dad had not understood or heard clearly. Dad had not a clue . . . zero . . . nada . . . just a bewildered look on his face. He looked over at me for this proprietary information. I said, somewhat incredulously, "Dad, you don't know what your own address is?" The answer of course was 230, 5th Avenue North. This is where he and my mother had been living for the past 18 years! I'm pretty sure he didn't even know his own post office box number. Not even sure he knew his phone number? Looking at me, he said in all seriousness, "I know where I live . . . why would I clutter my head with that information?" I chuckled and gave the clerk the address. For the past 18 years, Dad had walked back and forth to his office on the campus and evidently not once thought it was important to memorize his address, which was prominently displayed on the front door of the house.

For those of you who know my Father, you know that there is nothing wrong with his memory or his ability to retain a fact such as his own address. Dad is a veritable walking encyclopedia of information. When I was in school, working on a report or research project, I often asked Dad if he had any resources or information pertinent to what I was engaged in at the time. He would disappear into the labyrinth which was his library and emerge a short time later holding at least one, if not several books. Grinning from ear to ear, he would point out with his stubby index finger, the exact passages in the books that would be of help to me. Dad had a library numbering close to one hundred thousand volumes and he knew where every one of those books were located and what was contained therein. He had probably read the vast majority of them as well! These memory skills have served him well through his life as a great teacher, writer and preacher. Yet, he did not know his own address.

As humorous as I have found this event to be, I've pondered it over the last few years. How often do I, do we, clutter our minds with trivial stuff - not necessarily bad stuff, but stuff just the same? Stuff that takes our minds off our goals, distracts us from our purpose and sidetracks us from achieving what we have set out to accomplish. Maybe Dad was on to something. After all . . . he knew where he lived!