THE WRECK OF THE ISLANDMAGEE 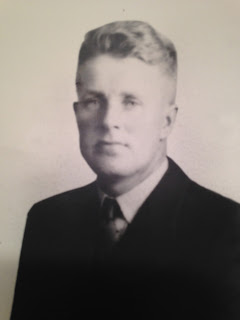 At around 5:00 o'clock on the afternoon of October 26, 1953, the merchant ship, Islandmagee set sail from the port of Birkhill, Scotland bound for the Port of Leith, also in Scotland. Her cargo that day was approximately 200 tons of wet sand. As often happens in the North Sea, a storm gale came up that quickly turned into a force 9 storm. Onboard the ship was a crew of 6. One of those men was my grandfather, James Rendall.

That fall, my father had made the long trip by ship from his home in Leith, Scotland to attend college at what is now Prairie College in Three Hills, AB, Canada. Taking the train from Edinburgh, Scotland to South Hampton, England he set sail on an Italian liner across the Atlantic, landing in Montreal, QC. Having been at sea for 6 days he then made his way by train another 5 days over the 2200 miles to the little town in the middle of the prairies. The setting could not have been any more different from the culture and topography that he had left behind. Enrolling that September, he took to his studies with vigor and quickly became one of the top students to have attended the school. 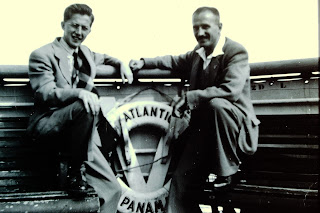 In November of 1976, I was 15 years old. One particular day I was glued to my little AM radio, as I often was, surfing the airwaves for anything that would catch my ear. The haunting strains of an electric guitar, a steel guitar and an acoustic 12 string guitar soared across the airwaves. After the distinctive introduction was over the iconic voice of Gordon Lightfoot began to sing . . . "The legend lives on from the Chippewa on down . . ."  ~ I was hooked! I had never heard anything that remotely sounded like this and as the song unfolded I realized that it was a "story song". It told the tragic tale of the bulk carrier, the SS Edmund Fitzgerald that sank in Lake Superior hauling iron ore from Duluth, MN to Detroit. MI on November 10, 1975. 29 men lost their lives that night in the awful storm. When launched on June 7, 1958, she was the largest ship on North America's Great Lakes and she remains the largest to have sunk there. While Gordon certainly took some artistic license in the telling of those events, he captured the essence of the horror in a very real way. When he sings at the end of the song, "The church bell chimed till it rang twenty-nine times", you can almost feel the hushed reverence and solemnity that surely was present that day.

As I often did when I made a new discovery and was excited about something, I went to find my Dad. I told him that I had just discovered a new song on the radio I thought he would like and I would play it for him the next time it came on. I knew Dad loved ships and the sea and I thought this would be right down his alley. Always trying to support my endeavors, Dad said that would be just fine and to let him know when the song played again.

A couple of hours later the song came on and I rushed upstairs from my little basement studio / shop to find Dad sitting in his chair. He was probably studying or marking papers, his normal activity on any given evening in our home. Turning up the song I looked at Dad expectantly for his affirmation of what a truly great song this was, and what great taste I had! Dad began to look agitated, even irritated as the song played on. Now the Wreck of the Edmund Fitzgerald did not follow the typical pop formula of a 3 minute song. It actually clocks in at 6 minutes and 40 seconds. As we sat in the living room for those long painful minutes, the atmosphere grew more and more awkward. Finally the song came to an end and Dad said, in maybe the most serious tone of voice I had ever heard him speak, "Son, NEVER play me that song again!" I was shocked and confused. Was the song too rock 'n roll? Was there an offensive lyric that I hadn't caught? Then, to my youthful, naive self the light went on. It finally computed and I felt absolutely horrible.

You see, on that fateful day of October 26, 1953 the Islandmagee took on water and sank, taking with her the entire crew including my Dad's father and my grandfather, gone at the age of 52. There was compelling evidence that at least some of the crew had made it into one of the life boats, but it sank as well. All the crew except my grandfather were washed up on the coast of Fife still wearing their life jackets. The hypothesis is that my grandfather rushed to launch the lifeboat which would have been tied down on deck as his leather knife holder was found in the boat later floating in the sea. He did not have time to put on a life jacket.

In what the papers referred to as a "double tragedy", the rescue ship, the Arbroath that was dispatched to the scene after being alerted by rocket flares and calls of mayday on the radio, also went down into the dark abyss. All but one of her crew perished as well. A court inquiry held in February of 1955 found, and I quote; "The Court is therefore of the opinion that the evidence does not disclose that the casualty to "Islandmagee" was caused, or contributed to, by the fault or default of any person or persons." In simple terms, it was down to mother nature or as the insurance companies like to call it, "an act of God", and that night in the North Sea, she was a harsh mistress.

The next day, October 27th, Dad received a telegram from his older brother Gavin with the cryptic message, "Father, lost at sea ~ Gavin". Dad had no money to make his way back to Scotland for the funeral and to be with his family as he had spent every penny he had to emigrate to Canada to attend school. In many ways he grieved alone. He had just turned 20 years old in August.

In today's vernacular, psychologists and counselors use the term "trigger", a word used to describe sensations, images or experiences that trigger a traumatic memory. This term is often used in relation to Post-Traumatic Stress Disorder (PTSD), of which there is an increasing awareness. In 1976 I had never heard of the word "trigger" other than my experiences with target shooting or in reference to the palomino horse ridden by Roy Rogers in the movies. It was not until the song had ended and Dad had made his proclamation that I finally realized what had happened. Growing up, Dad hardly ever spoke about his father and the pain of his loss. He had found ways to cope. The song and it's graphic retelling of the tragedy of the Edmund Fitzgerald was just way too close to home. Twenty three years later, the event was still raw.

Now while I might be forgiven for my lack of sensitivity, given my age and naiveté, I realized then, maybe for the first time, something of the pain Dad carried from losing his father at such a young age. It was something he rarely talked about. I had no intention of hurting my father, I just hadn't connected the dots.

I learned an important lesson that day, one I have always tried to keep in the back of my mind. Miller Williams sums it up nicely in these words, “Have compassion for everyone you meet, even if they don't want it. What appears bad manners, an ill temper or cynicism is always a sign of things no ears have heard, no eyes have seen. You do not know what wars are going on down there where the spirit meets the bone."

Salvaged ship's bell from the Islandmaggee


THE WRECK OF THE EDMUND FITZGERALD

The legend lives on from the Chippewa on down
Of the big lake they called 'gitche gumee'
The lake, it is said, never gives up her dead
When the skies of November turn gloomy
With a load of iron ore twenty-six thousand tons more
Than the Edmund Fitzgerald weighed empty
That good ship and crew was a bone to be chewed
When the gales of November came early
The ship was the pride of the American side
Coming back from some mill in Wisconsin
As the big freighters go, it was bigger than most
With a crew and good captain well seasoned
Concluding some terms with a couple of steel firms
When they left fully loaded for Cleveland
And later that night when the ship's bell rang
Could it be the north wind they'd been feelin'?
The wind in the wires made a tattle-tale sound
And a wave broke over the railing
And every man knew, as the captain did too,
T'was the witch of November come stealin'
The dawn came late and the breakfast had to wait
When the gales of November came slashin'
When afternoon came it was freezin' rain
In the face of a hurricane west wind
When suppertime came, the old cook came on deck sayin'
Fellas, it's too rough to feed ya
At seven pm a main hatchway caved in, he said
Fellas, it's been good t'know ya
The captain wired in he had water comin' in
And the good ship and crew was in peril
And later that night when his lights went outta sight
Came the wreck of the Edmund Fitzgerald
Does any one know where the love of God goes
When the waves turn the minutes to hours?
The searches all say they'd have made Whitefish Bay
If they'd put fifteen more miles behind her
They might have split up or they might have capsized
They may have broke deep and took water
And all that remains is the faces and the names
Of the wives and the sons and the daughters
Lake Huron rolls, superior sings
In the rooms of her ice-water mansion
Old Michigan steams like a young man's dreams
The islands and bays are for sportsmen
And farther below Lake Ontario
Takes in what Lake Erie can send her
And the iron boats go as the mariners all know
With the gales of November remembered
In a musty old hall in Detroit they prayed,
In the maritime sailors' cathedral
The church bell chimed till it rang twenty-nine times
For each man on the Edmund Fitzgerald
The legend lives on from the Chippewa on down
Of the big lake they call 'gitche gumee'
Superior, they said, never gives up her dead
When the gales of November come early